I enjoyed my loop again today until heading up the hill on 2nd Avenue at Elizabeth.  I was traveling west and a car traveling east turned left into my path.  I was going slow–it is one hell of a hill.  He was going pretty quickly, probably 25 or 30, and didn’t slow much to turn as the turn for him was more than 90 degrees.

I was hit squarely by the front bumper.  I landed on the hood, traveled to the windshield and ended up, somewhat mysteriously, seated on the roof facing forward.  The glass sunroof was closed, so the driver was subjected to a “glass bottom boat” experience that he never wished for.  At least I wasn’t wearing lycra.

I didn’t hit my head.  My mirror and glasses are fine.  Based on my minor aches and pains, and the fact that (I think) I broke the windshield with my left shoulder, it seems like I executed a pretty textbook stuntman roll.  Not taking credit for it.  Pure luck and physics.  I had all of half a second between the realization and the impact.  I just “went with it.”

After a minute or so I crawled down off his car.  I felt good.  Scared but good.  Nothing seemed broken.  Only a light abrasion on my left knee and a mild soreness in my right thigh.  I borrowed his phone to call Lacey who came to pick me up.  The driver waited with me.  He was very shaken.  I was in relatively good spirits.  Happy to be alive with working parts, right?

We had a nice chat.  Intense situations allow strangers to cut the bullshit and talk about good, deep things.  We did.  I harbor no ill will.  To my eyes, it was a mistake plain and simple.  I was starting to let it go before I got off the roof of his car.  Thank you, Buddha!  Hands palm to palm, as we say.

Lacey arrived and I made introductions.  Then I said good bye, loaded my bicycle into the car and rode home, where I had a shower, ate breakfast and headed to Urgent Care (out of an abundance of caution).

A bruise on my right thigh was was swelling, but I was pretty sure there were no broken bones.  Five x-rays showed no breaks or fractures.  Even though my head, neck and back felt good, they performed some neurological diagnostics.  Passed. I laughed to myself when they asked what I had for dinner last night.  That’s the kind of question I might not be able to answer in the best of circumstances.  But after one beat, I responded crowder peas, grits and kale.  Sounded good to me.  I was for a moment proud of my meal.

Eight hours later, I am still feeling pretty good.  My shoulder is sore, but not terribly so.  I took one ibuprofen, but probably won’t need another.  My left big toe bled a bit.  Saw that through the sock.  The nail was pushed into the nail bed just a bit.  The toenail may come off.  That is the sorest part on me just now.

Sound the trumpets for my beloved but probably deceased Rivendell custom.  Top tube and down tube are crimped.  One fork blade is crimped at the lug.  One seat stay is now gracefully curved.  The front wheel is out of true but I will try to correct it.  The Brooks Cambium saddle is abraded.  The rest of the components will come off the frame to be held in reserve for another frame in the future.  Rivendell Rodeo or wait and see?  The latter is probably best.  I have a few bikes in reserve. 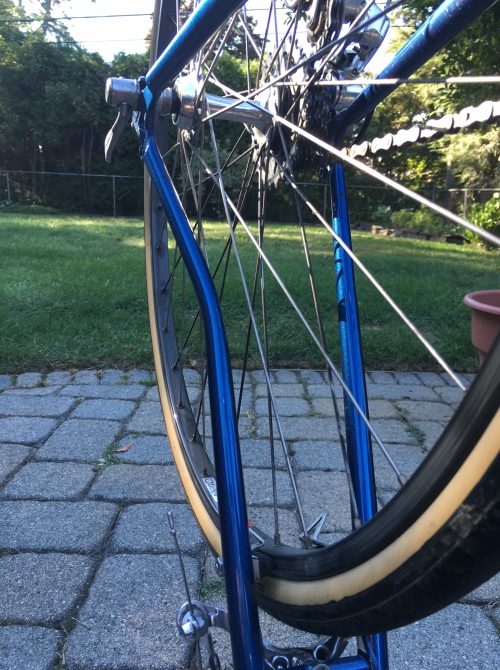 I’ll sound like a broken record, but I’m pretty sure Frida was with me when I was hit.  She was certainly there as I pedaled (I felt strong today), so perhaps she laid her spine along mine to strengthen it during the impact.  Lacey reminds me she was a terrific jumper, and that maybe she carried me safely to the roof of the car.  Yes.  I think that’s right.  Thank you, dearest girl.

Huge thanks to nurse Lacey.  I’ll let the bike frame go.  I’ll try to let Frida go (later).  But I’ll hold onto Lacey, thank you.  Sweetest, lovingest, Lacey, caring for my mind and body.  My treasure of treasures.  Kisses!

That’s it.  I hope that’s the last of it.  Raise a glass for soft landings!