Today is a terrific day.  Cooler, not humid and a little cloud cover to ease the eyes.  I biked “all over creation.”  Twenty miles if I add my dog walk.  This summer’s record.

Started by pulling Frida in her trailer to the community garden at six am.  Had a look around, picked a cuke and came home.

After walking the trailer queen around the pond, I pedaled to the co-op for the weeks groceries.  Had a chat with the grocery guy about keeping in stock the whole wheat Stacy’s tortillas.  It has been white flour only for months.  I still buy them, and they are awesome, but I’m not sure why they even use shelf space for the white flour variety.  Don’t you think 99% of a co-ops customers would want the whole wheat (half whole wheat, to be accurate) variety?

Returning home for the third time before lunch, I tried and failed to rally a few folks to come with me to lunch at Tanpopo Ramen, so I pedaled my fancy new ANT truss bike there all on my own.  Loved bombing down Clinton Ave.  A red light half way down was a bummer, but how fast should I go, really, with only a coaster braked machine!

Everyone but me has been to Tampopo, but here’s the tale from a vegan’s perspective.  The menu has lots for vegans–edamame, vegetable gyoza, haru maki, green salad, seaweed salad, fried rice (hold the egg) and vegetable ramen.

I ordered the vegetable ramen and specified spicy (a $1 add on).  See the blop at 4:30 in the bowl below?  That’s “spicy.”  Looked suspiciously like meat. 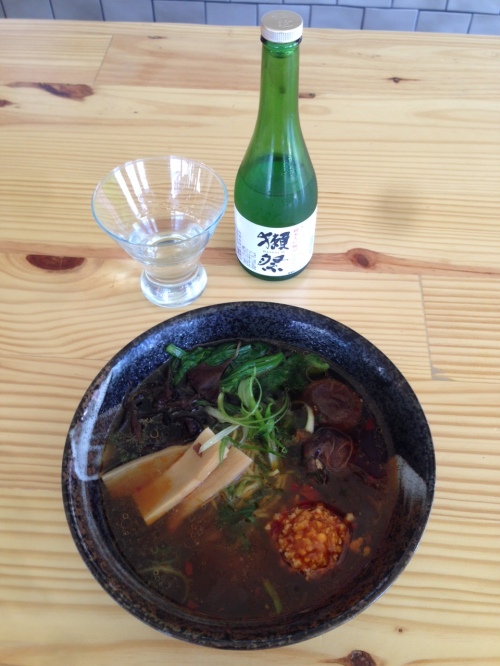 The menu didn’t mention seitan, but I had a go at the whonozewhat.  Pretty meaty.  I had to go ask the waitress.  She was mortified and apologetic when she learned I am vegan and she let me order the pork paste.  That’s what the spicy add on is.  Not just peppers.  Spicy pork paste.  Seems like the menu could say something.  What human would read “spicy” and think pork paste?  Maybe it is a well understood thing in the ramen world, but I’m a novice here and expect a few other Albany patrons are as well.  Lesson learned– if you are vegetarian and want spicy, ask for a bottle of sriracha.

I ate the porkified vegetable ramen.  I try not to waste food.  It was delicious but made me sad.  Not terribly so.  I raised the wall all omnivore kids build when they learn that the food their mother is giving them is animals.  Still, I was surprised they didn’t offer to remake the vegetable ramen or give me a discount.  I would have refused, but it would have raised my opinion of them.

The sake list, above, is good and fairly priced (double retail).  300ml bottles may be too much for lunch or motorists but NY law lets you take home the remainder.

I liked the outlets and hooks along the underside of the bar.  Nice touch (but maybe not code–I hope I don’t get them in trouble).

I’ll go back.  I’m excited to discover what the vegetarian ramen tastes like.  My guess is it will be terrific and I’ll become a regular.

After lunch, I pedaled up Clinton Ave on my one speed parader.  Not bad at all–I love hills and this bike does too.  But as soon as I got home I remembered a needed a growler of the Hottenroth Berliner Weisse from The Bruery in Placentia, California, so I pedaled my Rivendell road to Oliver’s.  When will I rest?!  Hint–right now.

The beer clocks in at a delightfully low 3.10% ABV.  Only water is more sessionable.  Don’t know Berliner Weisse?  Neither did I until I bought my first grower of this beer on Thursday.  It is brewed with both lactobacillus and a “hint of” brettanomyces.  It is not required but traditional to add a little woodruff or raspberry syrup to the beer to balance it out.  I had no hope of finding woodruff syrup in town (and the stuff turns the beer an eerie blue) but did pedal all over town on Thursday looking for raspberry syrup.  Torani was what came to mind.  I called Tierra first–they don’t sell syrups.  I called Ragonese and they sell Torani, but when I got there, no raspberry.  I bought a bottle of hazelnut Torani for no reason whatsoever, then pedaled on to the Daily Grind–no syrups–then across the street to Brew on Lark Street.  The guy there was helpful and really knowledgeable.  He was familiar with Berliner Weisse and knew about adding woodruff or raspberry syrup.  He said no way to Torani and suggested I make my own raspberry syrup.  Lightbulb!  Of course it is easy and good.  Off to the store for a couple of pints of raspberries.  Forty minutes later, I had this.

Apology for thinking of Torani?  Why not.  Before the hazelnut Torani impulse buy, I’d only owned one bottle of Torani (banana flavor for making ridiculous banana mochas I once had at professor Java that I was later making at home–all this eight years ago if you want a reason to not hold this against me) and had only tasted that flavor.  It was fine (might still be–there is a quarter of the bottle aging in the back of our cabinet), but I guess with the passage of time some folks have decided it isn’t up to snuff.  Certainly not very DYI, but after pedaling all over town to buy a bottle it would have felt close.  I’m not going to buy a bottle of raspberry Torani to do a side by side (then I’d have three!), but I can say my home made syrup is awesome.  In the Berliner Weisse?  Really yummy and very pretty, too.  You just add a bit, so it looks like you are drinking pink champagne.  Actually, from wikipedia, Napoleon’s troops dubbed Berliner Weisse “The Champagne of the North.” I did notice today that the co-op sells a couple of high end syrups (organic and no strange ingredients) by the coffee beans.  They have raspberry and the bottles are small.  Just saying (in case you end up with a growler of this awesome beer).

Now what do do with my bottle of hazelnut syrup?  I poured a half ounce, then another half ounce, in 12 oz of seltzer.  It was good for about half the glass, then my head ached.  Lacey has already indicated without indicating that she won’t help finish the bottle.  I can’t blame her but do not look forward to pouring the rest of that stuff down my syrup hole.

Apparently all that tweeting left me with some paragraphs to get out.  Enough already.  Bye.